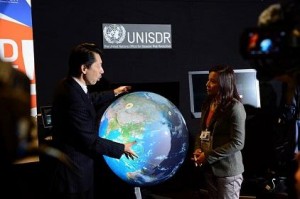 By Jonathan Fowler
GENEVA, 30 December 2015 – Hundreds of science and technology specialists from around the globe will come together next month to harness their expertise to help reduce disaster risk.

The 27-29 January UNISDR Science and Technology Conference, in Geneva, will draw around 800 delegates from disciplines spanning the natural and social sciences, medicine and engineering, among other fields, together with policymakers and disaster risk reduction practitioners. Together, they are set to issue a roadmap for implementing the Sendai Framework for Disaster Risk Reduction.

“The science and technology sector is a critical component of the implementation of the Sendai Framework,” said Ms. Margareta Wahlström, Special Representative of the UN Secretary-General for Disaster Risk Reduction.

“We need to make sure that risk-informed decision-making is founded on the best science and evidence available, and that there is a commitment to concerted efforts to build science capacity and to countries needing such support,” she added.

Adopted by the international community in March, the Sendai Framework seeks to reduce substantially by 2030 the number of people killed or affected by disasters, as well as economic losses. It also sets an interim target of 2020 for countries to have disaster risk reduction strategies in place.

Knowledge is essential to the process. The Sendai Framework calls for enhanced scientific and technical work on disaster risk reduction and its mobilization through the coordination of existing networks and scientific research institutions at all levels and all regions. It also seeks a strengthened evidence-base to support implementation, with the promotion and dissemination of research into disaster risk patterns, causes and effects, and its application in decision-making.

Recognizing the importance of research, scientific and technical information for disaster risk reduction, UNISDR established a special advisory body in 2001.

Its current incarnation, the Scientific and Technical Advisory Group (STAG), is a 12-member panel of experts from around the world. Its role is to provide technical advice and support in the formulation and implementation of activities carried out by the disaster risk reduction community, and its work encompasses all aspects of the scientific and technical dimensions of risk reduction, with particular emphasis on the needs of developing countries.

“The Sendai Framework changes the game. It finally recognises that science and technology has a staggeringly important role in not only the synthesis, the analysis and the scientific advice, but also in the review and monitoring of how we deliver,” said Professor Virginia Murray, chair of the conference organizing committee, Vice-chair of the STAG and Consultant in Global Disaster Risk Reduction for Public Health England.

“Disaster risk reduction involves all of the sciences. This science is not blue sky science. It is the pragmatic science of what people need,” she added.

Having successfully helped to craft the Sendai Framework, the STAG is due to be expanded at the January conference into the UNISDR Science and Technology Partnership.

“Huge numbers of people in the science domain are already delivering, at all levels, on all the different types of science. In our role supporting the implementation of the Sendai Framework, we must ensure we use an evidence base; we promote scientific research on disaster risk patterns, causes and effects; we disseminate risk information; make the best use of geospatial information; and look at providing guidance on methods and standards for risk assessment, disaster risk modelling, and the use of data,” said Professor Murray.

“We have a real task to look at where the gaps are in the research areas and to help to set priorities. But one of our main tasks is to make sure that we can share this information with the people who need it: policy makers at the local, national, regional and even the global level. Our job is to share what we know in a way that’s really useful and can be used, to make it accessible, to make it transparent, make it effective, make it the best we possibly can.”