Communities in Texas and Oklahoma Respond to Severe Springtime Flooding 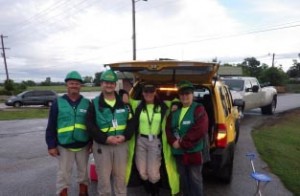 Bixby CERT volunteers prepare to set up barricades in the Southtown South neighborhood.

In May 2015, Texas and Oklahoma experienced significant rainfall that resulted in severe flooding in many communities across the southern plains. Two of those communities, Denton County, Texas and Bixby, Oklahoma, shared their stories about how their CERT programs responded to local flooding.

Many communities in Denton County, which is in northeastern Texas, are located near bodies of water that have a tendency to flood after heavy rainfall. “We have people who love to live in the rural areas because the creeks are beautiful, but when they flood, it’s not so pretty,” said Denton County Community Emergency Response Team (CERT) Coordinator Brenda Gormley.

On May 10, 2015, Denton County CERT deployed 52 volunteers in response to what Gormley describes as “one of the worst floodings I’ve ever seen.” That morning, severe weather struck the community, bringing with it heavy rain and flooding that continued throughout the month. Denton County CERT volunteers were on call for nearly two months until the rain stopped. A combination of twelve inches of rain locally and runoff from surrounding counties caused flooding in Denton County that resulted in more than 40 road closures and 16 flooded homes.

“Lakes and creeks overran. The Trinity River started backing up and homes, farmland, and businesses got flooded. It was quite a mess! Everyone had a lot of damage,” said Gormley. “Prior to this we were under a severe drought. We went from extremely dry to extremely wet. Drought conditions exacerbated the flooding.”

During the response, volunteers conducted damage assessments in the Krum and Sanger neighborhoods, two of the county’s hardest hit areas. Partnering with the local fire departments to canvas the neighborhoods, CERT volunteers checked homes for damage and determined if residents had running water. “Volunteers were given mapping grids, drove the streets, filled out assessment paperwork, reported back to the office, and repeated the process,” explained Gormley. CERT also connected with members from the Denton County Office Of Emergency Management who specialize in geographic information mapping systems (GIS) to mark the location of damaged homes on a map so volunteers can quickly find flood-prone areas during future flooding incidents.

In some areas of Denton County, residents living in mobile homes evacuated and moved to shelters. Using the skills they learned during shelter management training they completed before the incident, CERT volunteers partnered with the American Red Cross to open a shelter in the Lewisville community. The CERT program’s Animals in Disaster team provided a separate shelter where residents could drop off their pets. “We called in the team to take care of animals so people didn’t feel the need to stay at home. They could come to the shelters knowing their pets were being taken care of,” said Gormley. “Denton County CERT members are a caring group of people… I have a great team.”

From Texas to Oklahoma, severe weather continued across the plains last May. Much of Bixby, which is a suburb of Tulsa, Oklahoma, is in a floodplain zone (the Arkansas River runs right through the middle of the community) and the city has experienced many floods in recent years. On May 23, 2015, Bixby CERT sprang into action for its very first disaster activation after flooding forced road closures in several parts of the city. One neighborhood, Southtown South, was hit so hard by flooding that utility companies shut off service to the area for several hours, leading some residents to evacuate. The Watch Commander at the Bixby Police Department contacted Bixby CERT Program Manager, Corporal Michael Konshak, also of the Bixby Police Department, and asked if CERT would be available to assist with Southtown. The CERT program sent out a mass text to the volunteers to request their availability to help. 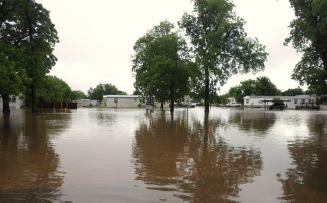 Three teams of four CERT volunteers each responded within 90 minutes of being mobilized. Two teams helped the local police department set up barricades in the neighborhood and assisted evacuating residents by supporting police-led traffic and crowd management. CERT volunteers remained stationed at barricades throughout the night until relieved by day shift police officers. The volunteers returned the following night for a second overnight shift. The third team assisted with filling sandbags.

“The Bixby CERT response to the flood callout was excellent. I could not ask for a better response. Those that participated were truly committed and eager to assist in any way they could,” said Bixby CERT Program Manager Corporal Michael Konshak. In fact, Bixby volunteers are so committed that one volunteer delayed his honeymoon to participate. While Bixby CERT volunteers did not have flood-specific training, Corporal Konshak says volunteers are already prepared through life experience.was their only flood training up to that point.”

Experience also taught Bixby CERT volunteers some valuable lessons during the callout that Corporal Konshak plans to address before the next activation, including having more reliable two-way radios so that they are not dependent on cell towers for communications, and obtaining vehicles to transport volunteers between various callout locations. Konshak also realized that despite the fact that Bixby is prone to flooding, very few volunteers had rain gear. Fortunately, one of the volunteers, a local business owner, has offered to purchase rain gear for the program.

Both CERT programs proved to be a valuable resource in their communities, providing critical support in their time of need. Each program also received recognition from the community for their efforts. “Our CERT callout garnered a great deal of positive attention,” said Corporal Konshak. “All of the city department managers had nothing but positive feedback for the callout, and residents were grateful for the assistance.” In Denton County, “A day does not go by that the emergency management team does not say ‘thank you’ and that they appreciate what CERT does because this is our home and theirs,” said Gormley.

For CERT programs who may respond to a flood incident, Gormley advises programs to be proactive in learning more about their communities and to connect with community leaders. “Watch the weather report and learn everything you can ahead of time. Know your area…and ask emergency managers what type of help they would need in a disaster. Don’t wait until the disaster to be prepared – it’s too late then.” Even though National Preparedness Month has come and gone, Gormley stresses that preparedness should be a year-round priority, and that it’s important for individuals and families to have a kit, make a plan, and learn about local hazards.